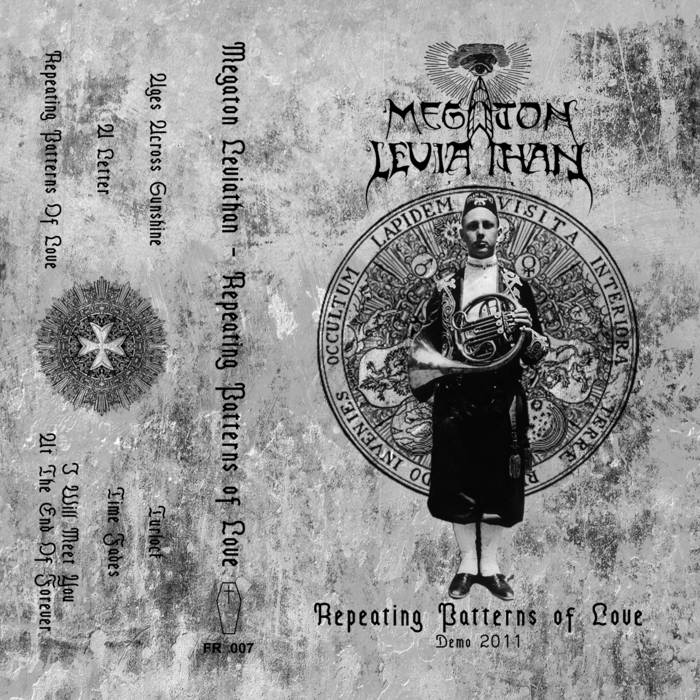 steve From the time-bending touchstones of Joy Division/Spiritualised/Bell Witch through the haze of Psyche a masterpiece of tragic beauty is wrought.
The stately pageantry of it's forced-march,open-heart surgery on the human condition until transcending it completely in the kosmiche freakout of the final track's closing moments, is breathtaking(especially considering these are supposedly outtakes).

If tears haven't been shed by it's end,you may want to check for a pulse. Favorite track: I Will Meet You At The End Of Forever.

The Digital Download of the 2011 CULT Cassette only release!

Water Wealth Hell On Earth saw the light of day since we thought we are a DIY project and we where playing largely to a metal crowd. we felt the doom laden trope would appeal despite the proto industrial and Kraut influences. what remained was the Repeating Patterns of Love Demos. i compiled them including the Ages Across Sunshine and the 13 minute epic I will Meet You At the End Of Forever. I showed the Spanish label Feretro Records my vision for the next album and we Decided to release this as a demo cassette in a edition of 200 in hopes to drum up interest in a full length LP, which never happened. they sold out very quickly and is still very highly sought after. NOW AVAILABLE TO YOU VIA DIGITAL DOWNLOAD.


here is what Aquarius Records has to say
We all went a little crazy for the debut from Portland doomlords Megaton Leviathan, whose particular brand of doom was on the poppy, melodic, washed out and dreamy side of the doom spectrum. So much so that we felt obligated to come up with a new term for their sound, 'soft doom', when we made their cd a Record Of The Week. And we still can't get enough of these guys' woozy, spacey slowcore laced, drone flecked soft doom. So we were psyched to discover a brand new cassette, their newest demo, a teaser for their forthcoming full length, and if anything, the 'softness' of their doom has been transformed into something more like spaciness this time around. At least on the opening track, that sounds like Hawkwind crossed with Spacemen 3 and slowed down to a plodding, nodding dirge, hazy squalls of wah guitar, sung/spoken vocals, everything drenched in effects, shards of vocals, slivers of guitars, sent spinning into space trailing streaks of echo and reverb and delay, a sprawling drug rock space drone epic, that rivals most of the other bands out there who set their controls for space rock. In the case of Megaton Leviathan, it somehow sounds more organic, like their quest for slo-mo soft doom heaviness just somehow ended up here.
And as the record plays on, it becomes evident that the first track was no fluke, the doom almost entirely replaced by drugged out space rock and psychedelic slowcore, sure it's still dark and heavy, and slow and dirgey and okay, a bit doomy, but it's way less 'doom' and way more washed out, woozy, lysergic, hazy, gauzy, hypno-dronerock, repetitive, and cyclical, and hypnotic, the production simultaneously lush and lo-fi, the distortion cranked way up, but instead of making it heavy, it makes the sounds crumble and wash out and crystallize, making the overall sound seem that much more warm and rough and organic, especially when the band slips into slow spaciness, all low slung bass, melodic guitar echoes, and big drums, lumbering and loose, the sort of thing Three Mile Pilot were masters of in the old days, loads of space, all held together by sinewy basslines and krauty rhythms, and then the guitars come back in, and again, we're well past doom, the sound lifting free of the surface, and drifting heavenward, somehow mixing Hawkwind, Codeine, Low, Spacemen 3, Loop, a little doom, lots of drugs, and even more effects, into the sort of thing that should have fans of the current crop of space rockers (Wooden Shjips, Carlton Melton, White Hills, Moon Duo, Heads, Lumerians, White Noise Sound) losing their shit.
LIMITED TO 200 COPIES. Each one hand numbered, and record on swank reflective gold cassettes.


What Julian Cope Has To say about this demo:

I gots to announce the presence of a highly listenable cassette album entitled REPEATING PATTERNS OF LOVE by North American trio Megaton Leviathan, that’s scoring molto repeated listens throughout our Yatesbury home. Bearing down upon the listener with all the post-punk attitude of a metalled-up Magazine or Joy Div, Megaton Leviathan’s power relies entirely on the impenetrable mesh that its musicians create; vocals being subsumed into the general stew of sound, and the rhythm section shuddering and jolting like a narrow gauge railway engine whenever left exposed. In truth, REPEATING PATTERNS OF LOVE breaks no musical barriers, but brings together such a sparkling menu of sounds and moves that the whole record hangs together marvellously.

Bandcamp Daily  your guide to the world of Bandcamp